A Contemplative Life – Thinking it over = Losing a Friend

On Saturday I received a text that my dear friend had passed away on Mother’s Day. Linda had rheumatoid arthritis of the lungs for a long time. In the late ’90s, Linda moved with her husband Tom to Wisconsin. We kept in touch with cards and as time went on with phone calls.

Linda loved animals and always had a cat and a dog. She was passionate about the birds that came to her feeders, which she would describe and name during our phone calls. Her enthusiasm was contagious. She was a natural raconteur.

Tom and Linda lived many adventures together. Frequently, they traveled to Jamaica during the cold winter months. There were many tales from their lives that would have made great reading.

Tom had been a Navy Seal. He passed away in November of 2017. He had lung cancer, which was attributed to exposure to Agent Orange. Linda was left alone that winter; except for visits from her daughter and son-in-law, who live in Minnesota. We were in frequent contact.

Linda had to have oxygen 24/7 to breathe. I visited her in the summer of 2018. The reality of her situation hit home. She was tethered to a large machine with a long clear tube  that allowed her to walk around her house.

Although she would be hospitalized several times during that year, her strong attitude and strength never wavered. I called her “The Viking” because of her Norwegian heritage. She was a tall, blond and met the world with a ready smile. Linda had the strength to keep going and not give up on life. In our frequent phone calls she would talk about her husband, Jamaica, and her family.

Linda still had the can do attitude and was frustrated that she could no longer do things for herself. Eventually Linda managed to move back to the Twin Cities to live near her daughter and son-in-law in October of last year.

Then, during the arrival of a record breaking cold and snowy winter this year, she fell tripping over a new coiled cord for her oxygen in her apartment and broke her upper right leg and fractured her left thigh. I heard the news when she called me. Linda emphatically told me not to come to the hospital. The surgery was a success, but she was restricted to bed for three months. Shortly after the surgery she went to a rehabilitation center.

All the while at the rehab center she was looking forward to moving into a new place and told me about her plans. She made beautiful beaded jewelry, which she wanted to return to doing. There were times she confided in me that she felt like she didn’t know if she could keep going.

Linda was a remarkable, talented woman and I miss her energy and irrepressible spirit. Tom was a good guy, who shared Linda’s spirit of living life to the fullest. I will miss them.

Tom and Linda, Linda’s bead work and some of her pets.

They will be buried at Fort Snelling Veteran’s Cemetery in July with a 21 Gun Salute for Tom. This is my farewell tribute to my friends who loved life.

Thanks for stopping by my kitchen.

Have a peaceful day. 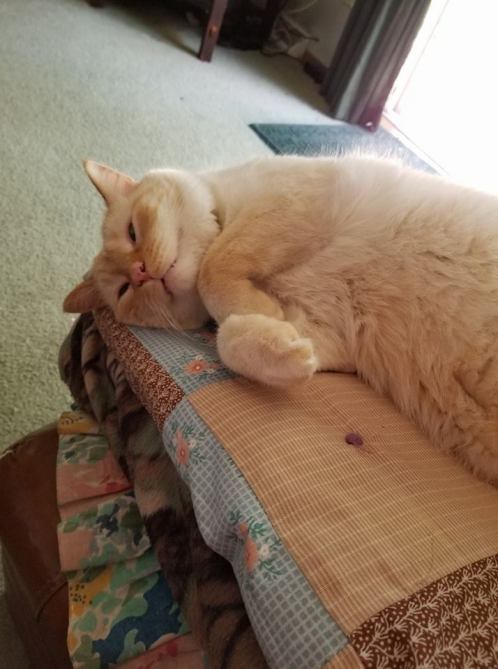 Ozzy was at Barron city humane society. He was a stray. My daughter and I were going to shelters looking for my forever cat. He was in another holding area all alone. This is our 3rd Siamese cat. They are different than other cats. They need lots of attention ( on demand ) They talk a lot too! As you can see he fit right in. You don’t see many Flame Point Siamese cats. Most of the time they are Seal or Blue or Chocolate.

Ozzy went to live with a couple that Linda knew, who brought him by the rehab center to visit her.

Visual artist and writer hunting words, languages, visions, and insight in my kitchen - connecting Art (Kunst) and culture and slow food cooking. Classically trained artist. Paint and draw with traditional materials. Live in the Northland where it's six months of winter. Appreciate the little things in life. Sharing food and art experiences and the lessons that my talented and generous friends have given me.
View all posts by kunstkitchen →
This entry was posted in Art and Architecture, Contemplative life and tagged agent orange, art, crafter, dogs and cats, Friends, hand made bead work, rheumatoid arthritis of the lungs, Saying Farewell, tribute to a friend who passed away. Bookmark the permalink.

This site uses Akismet to reduce spam. Learn how your comment data is processed.