I looked up a biscuit recipe online for biscuits made with olive oil.  The recipe I found was pretty simple. Other comments about olive oil biscuits were that it was an iffy proposition to make biscuits with olive oil.  To all the doubters, I would like to say. “T’aint so.”

For the basic Southern Biscuit recipe I went to “The Memphis Cook Book” from The Junior League of Memphis Tennessee in 1964 and adapted it.

This biscuit recipe uses buttermilk, which makes a moist and rich tasting biscuit for me.

I combined this with my previous post for drop biscuits to make this a savory recipe. Important to note that I researched online the proportions of replacing the butter or lard with olive oil.

Because of the water content in butter, the proportion is ¾ of the amount one would have for butter.

Here’s the site about olive oil and baking substitution that I found helpful. http://thepassionateolive.com/wp/baking-with-olive-oil-instead-of-butter/ Retrieved June 10, 2014. 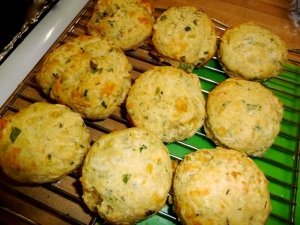 Sift dry ingredients together.  Use a fork to add in the Cheddar and Monterey Jack cheeses along with the parsley, thyme and rosemary.

[From the original Southern recipe – Work in lard with fingers until mixture resembles cornmeal.]

Instead of lard, mix in the olive oil with a fork until mixture resembles cornmeal.  Should you find that the 9 teaspoons plus ¾ teaspoon is not enough olive oil, measure by teaspoon and carefully add until you get the right consistency.) It depends on the climate or time of year. Watch that the mix doesn’t become wet.

Stir in the buttermilk. Turn dough out on a floured board and knead only until the dough can be rolled.  Roll out ½ inch thick and cut with flour cutter. Prick the top of each biscuit with a fork.  Bake at 450 degrees for 8 minutes. Place in the middle of the oven. Yield 16 biscuits. 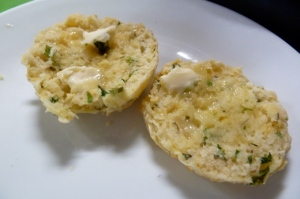 Notes: When I watched a southern chef make biscuits on TV, he showed that less is more with the kneading the dough.  It’s not like making bread.  I folded the dough in half and in half again with floured hands. Then patted the dough into a round shape about ¾ of an inch thick.  I used a glass jar to cut the biscuits and put the scraps together to cut one more.  It made 9 biscuits.  Figure that a half an inch thick measurement would make more biscuits.

Olive oil flavors vary greatly. For this recipe I used an organic virgin olive oil from Spain, which was purchased at Trader Joe’s.  It is a strong flavored olive oil that luckily complemented the savory herbs and cheese.  Next time I will try a sharp cheddar cheese. 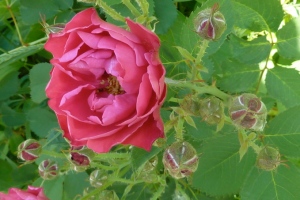 Visual artist and writer hunting words, languages, visions, and insight in my kitchen - connecting Art (Kunst) and culture and slow food cooking. Classically trained artist. Paint and draw with traditional materials. Live in the Northland where it's six months of winter. Appreciate the little things in life. Sharing food and art experiences and the lessons that my talented and generous friends have given me.
View all posts by kunstkitchen →
This entry was posted in Cheese, Quick Breads, Slow food and art in the kitchen and tagged Cheddar Cheese, cheddar cheese biscuits, cheese in biscuits, olive oil, olive oil biscuits, parsley, rosemary, Savory biscuits, spanish olive oil, Thyme. Bookmark the permalink.

This site uses Akismet to reduce spam. Learn how your comment data is processed.